Turn your shower into a hot spring spa with the Kenrico Ion Shower Head EX ® and treat your skin, hair, and tired muscles to the healthiest shower you've ever had.

It's so technologically advanced, it sets a new standard in style and performance.

A unique blend of rare quartz, citrine crystals and natural minerals straight from the famous hot springs of Japan shoot streams of super sized water jets that sooth, massage, and wash away your stress. 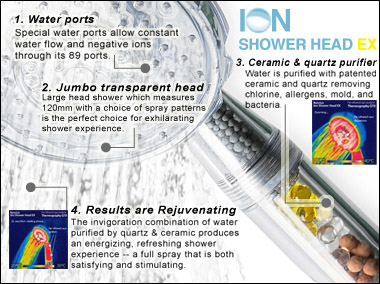 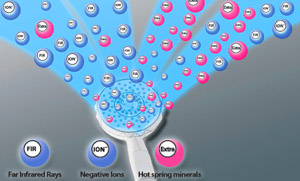 A technological advanced natural shower head that sets the new standard for next generation shower heads. This is the most stylish, effective shower head and, better still, it comes with both handheld and wall mounted shower heads for the price of one.

Streams of 89 water jets that come splashing to your whole body and more. Choose any spray patterns that fit to your liking by simply turning the dial.

Contaminants are removed with reduction capability of the rare quartz and citrine crystals. Furthermore, fresh natural minerals from famous Japanese hot springs were added to promote the health of the skins and scalps. The only shower head that provides hot spring showering experience.

Far infrared is part of the spectrum of light emanating from the sun. Far infrared is not visible to the eye, but you feel it as heat penetrating into your skin. You may be familiar with the infrared heat lamps sometimes used in bathrooms. Far infrared produces heat in a similar fashion, but is much more efficient because it penetrates even deeper into the skin.

Far infrared light, and its therapeutic properties, have been studied in Japan for over twenty years and are now beginning to become very popular in the rest of the world. Far infrared is very helpful for healing the skin, blood circulation, and skin cell revitalizing. Far infrared ignited and dispersed from Kenrico Ion Shower Head EX ® is 100% natural and 100% safe.. 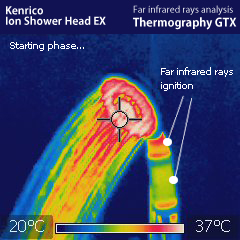 Kenrico Ion Shower Head ® tto emit far infrared rays. Recorded at the start of the use. 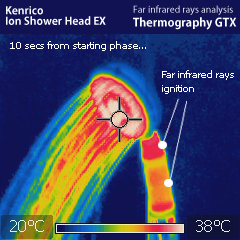 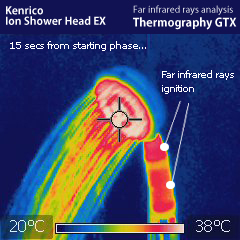 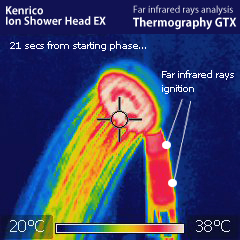 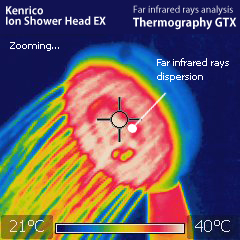 Close-up thermography image clearly showed the presence of far infrared rays that were emitted outwards in all direction to enhance health.

Negative ions are odorless, tasteless, and invisible molecules that we inhale in abundance in certain environments; think of mountains, waterfalls, and beaches. Once they reach to our bloodstream, negative ions produces biochemical reactions that increase the levels of serotonin helping to relieve stress (calming), alleviate depression, boost our daytime energy and increase defence against infection.

Ions are molecules that have gained or lost an electrical charge. They are created in nature as air molecules break apart due to the sunlight and moving air and water. You may have experienced the power of negative ions when you last set foot on the beach, hot springs or walked beneath a waterfall. The air circulating in the mountains and the beach is said to contain tens of thousands of negative ions.

Kenrico Ion Shower Head EX ® binds the organic atoms into other atoms or other small molecules before the removal. It is made up of four porous ceramic filtration system, consist of natural quartz, citrine crystals, red and gray ceramics. The red ceramics are used for water purification (reduction, antibacterial and deodorizing). The grey ceramics are used for negative ion emission and involved with the dechlorination of water. With the addition of natural quartz and citrine crystals, chlorine is reduced to chloride ion by the addition of electrons.

Chlorine gas from water treatment processes of Cl2(g) dissolves in water to form a hydrolysis product of Cl2(aq). The ceramics in the Kenrico Ion Shower Head EX ® breaks the chlorine in the waterr int chloride ion. Chloride ion converted from Chlorine attracts and surrounds its atom with water molecules creating a safe barrier against skin contact. 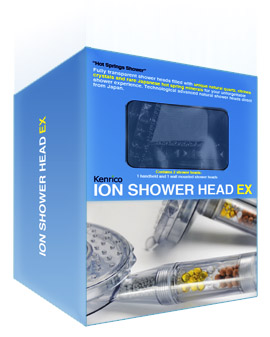