In different degrees, many humans end up with harmful toxins in their bodies. They may absorb heavy metals and produce high concentrations of uric acid and oxalic acid in their systems, which may cause health problems.

Heavy metals are prevalent in agriculture, and also occur in manufacturing, pharmaceutical and residential settings. They also occur in industrial environments and this is where most adults tend to absorb them. Children usually ingest heavy metals by engaging in hand-to-mouth contact with contaminated soil or by eating non-food items (such as dirt or paint chips).

Heavy metals become toxic, when they are absorbed into the body and accumulate in the soft tissues.

Uric acid can be produced in large quantities in the body and this usually increases with age. Uric acid occurs from the natural breakdown of our cells and from the foods that we eat.

High levels of uric acid in the blood can cause solid crystals to form within the joints, resulting in pain and inflammation. These high accumulations can be linked with known risk factors for dementia, including high blood pressure, atherosclerosis, Type 2 diabetes, abdominal obesity and insulin resistance.

Researchers at John Hopkins and Yale University medical schools have found that older people with serum (blood) (uric-acid levels in the high end of the normal range) are more likely to process information slowly and experience failures of verbal and working memory.

Oxalic acid is found in high concentrations in such foods as spinach, beets, greens, parsley, okra, leeks and collard greens.

It is not currently known if oxalic acid has some other beneficial effect on the immune system. However, oxalic acid can precipitate in the kidneys as calcium oxalate crystals, and form an estimated 80% of kidney stones.

Not all users have all heavy metals, uric acid and oxalic acid at the same time because not everyone suffers from the same type of toxicity or illness.

CONFIDENTIALITY
The information contained in this document, especially unpublished data, is the property of Kenrico LTD and Japan Food Research Laboratories and is therefore provided to you in confidence for review by you, your staff and an applicable institutional review committee. It is understood that this information will not be disclosed to others without written authorization except to the extent necessary to obtain informed consent from those persons who are to be subjects in this study.

No traces of heavy metals were detected in the NEW SAP SHEET.
However, traces of Lead, Cobalt and Chromium were found in the USED SAP SHEET in the following quantities:


The ppm (parts per million) indicated a small presence of heavy metals. There is a high probability that if the SAP SHEETS are used every day, more heavy metals may be removed from the body over a period of time.

No traces of uric acid were found in the NEW SAP SHEET. Samples of the USED SAP SHEET were taken and photos were made by an Olympus cellular microscope in the laboratory. Analysis of the samples showed an accumulation of white crystallized clumps of uric acid. 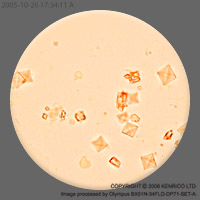 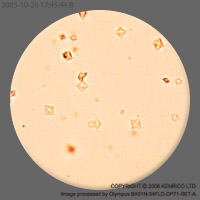 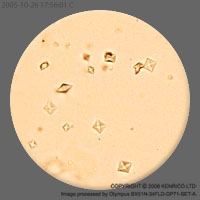 Analysis of samples taken from the accumulation of white crystalized clumps found on sapsheet after use.

No traces of Oxalic Acid were found on the NEW SAP SHEET. Liquid samples of the USED SAP SHEET were taken and photos were made by an Olympus cellular microscope in the laboratory. Analysis of the samples and blood spots that appeared on the samples, showed an accumulation of Oxalic Acid. 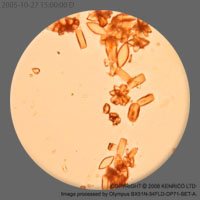 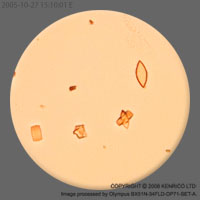 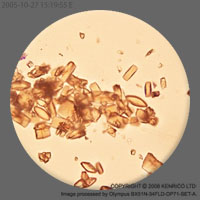 Analysis of samples taken from the liquid and blood spots found on sapsheet after use.